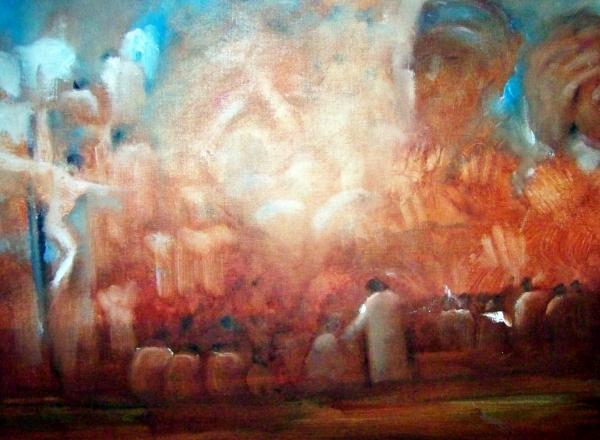 Life is like a canvas waiting to be used. We fill it with texture, and it becomes rough and uneven as the edges crack into shapes which we did not actually want. We study this from all angles and decide which way the canvas should turn. While in this frame the emptiness predominates as we contemplate the direction of the focus. We then decide to rather put it down for later work, allowing it to speak into an image we can work on towards completion of the task of creating the masterpiece which the blank canvas had promised us in the beginning.

Applying colour requires deep introspection on where to put emphasis and sometimes the run off creates its own pattern of beauty to direct the future scope of the creation. It is in being able to identify and appreciate the beauty that may be hidden behind dark spaces, that brings satisfaction that the canvas is a never ending unfinished work which has great depth in enfolding the mix of various lines and colours as they coalesce together and reveal the artistry of the Great Hand that controls and directs the artwork.

May your canvas continue to find Truth revealing its scope in accomplishing a Finished Work to meet the pattern of a Masterpiece in the making. Every canvas has a potential but it is in the difficult times of introspection in Life that all growth and Truth is revealed.

Paint a beautiful painting of Life.